"Perceive that which cannot be seen with the eye".
Miyamoto Musachi, Japanese swordsman, 1584 - 1645

WELCOME TO MY WEB SITE 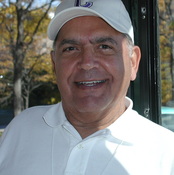 I invite you to explore all of the various pages of this site including the photographs of my sculptures which I have arranged in chronological order starting with the only remaining piece that I did while in college, to the sculptures and art that I have created during the past several years while taking classes at the University of Virginia. You can also see photos from Burning Man 2011, 2012, 2015, 2016 and 2017, my orchid collection and find out a bit about me and my family. I have included some of my favorite photographs that I have taken throughout the years as well. You might also be interested in taking a look at the photos of the Chihuly, Kehinde and Terracotta Soldiers exhibits that were  at the Museum of Fine Art in Richmond. I will be updating the site on a regular basis and will keep you advised about the many exciting aspects of my life.

Biography:
I was conceived sometime in January 1937 in or around Trinidad, CO with my mother giving birth to me on Sept. 28. We lived in Trinidad and Alamosa Colorado until 1944 when my father got his draft notice to report for induction into the U.S. Army. He moved his family to Lincoln, NE to be closer to relatives. Much to his surprise and good fortune he was rejected for duty and was released to return to civilian life. We moved to Omaha where we remained until 1960 when my father decided to move to New Mexico. Most of my education took place in Omaha culminating in me receiving a Bachelors of Arts degree from the University of Nebraska, Omaha. My degree was in speech and drama.
After graduating I joined my parents in New Mexico and tried to find a job. Not an easy task since I faced being drafted. I got a do-nothing job and was so frustrated that I went to the post office one day to join the Air Force but the Air Force recruiter wasn’t there that day. I saw a poster of a tall, slim sailor in the window of the Navy office (I knew nothing about the Navy) and was drawn into the office. Before I knew it I had signed on the dotted line for Officer Candidate School in Newport, RI. I had only seen the ocean once so, needless to say, this was truly going to be a new and exciting experience. After four very long months in OCS I was commissioned an Ensign and embarked on a 25-year career that took me to bases on the West and East coasts, Hawaii and Viet Nam. My designation was as a public affairs officer which put me in a position to participate in historic events such as the return of Apollo 10 and 11 astronauts from the first circumnavigation of the moon and first moon landing and the International Naval Review commemorating the 200th birthday of the United States that took place in New York City.
I retired in 1985 and took a job with the U.S. Navy Memorial Foundation in Washington, DC. As the project officer for the construction of the Navy Memorial and the project officer for the design and construction of the Visitors Center I worked with designers, artists and sculptors which renewed my interest in art and sculpture. I started taking sculpture classes at The Art League in Alexandria, VA and after rising to the position of Vice President for Operations at the Foundation, I resigned my position and took a job as the Facilities Manager for The Art League in Alexandria, VA. I spent 8 years with the League and became a professional sculptor having received numerous commissions and sales and having designed an 8” Female Sailor that is being mass produced and sold in the Navy Exchanges around the country.
I have been married to my wife Marcia for many years  and have two children and five grandsons.
Dreams, visions and desires
As an octogenarian, believe it or not I still have dreams, visions and desires. The most important thing in my life now is to remain active and healthy so that I can continue taking classes at the University, to be able to sculpt, raise orchids, make wine and to enjoy my family. In addition, I hope to reprise my journey to Burning Man each year until I can no longer manage the trip. My primary goal is to reach the age of 100 and still know who I am and not have to wear Depends. 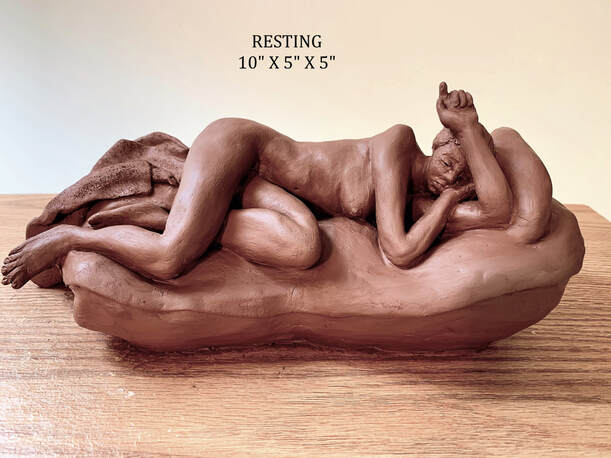 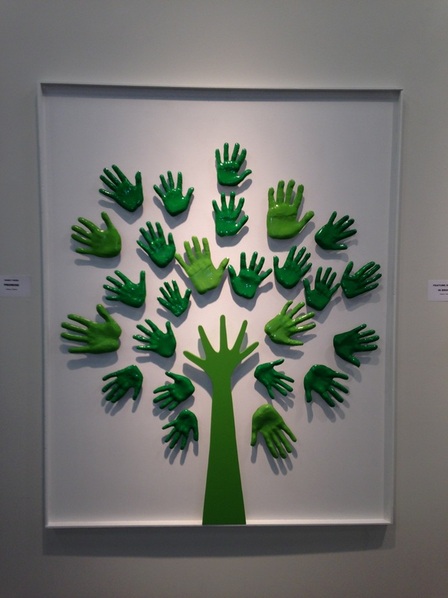 As the final project in the 2013 Fall term sculpture class at the University of Virginia, our final assignment was to do a self-directed sculpture. Some five years ago when I first started taking classes at the University the first assignment that the class was given was to write a proposal for a request for proposals issued by Albemarle County for a sculpture to be erected in the Echoes of Nature Park adjacent to the Baker Butler Elementary School. The winner/winners of the contract would receive a monetary award to cover the cost of materials and a stipend for the pocket. I was one of two students selected to execute our designs.
My design involved taking hand impressions of children and adults from the school to use for impressions in an obelisk made of concrete. I managed to save the rubber hand impressions for use in another sculpture.
While trolling through the internet looking for ideas that I could use the hand impressions for, I ran across the logo for an organization named Sandy Hook PROMISE and decided that since the first anniversary of the Sandy Hook tragedy was near I would use the hands to replicate the logo in 3D. The result is pictured to the left.

As many of you know, I have been a student at the University of Virginia for six years and have had the opportunity to do a number of projects that could only have been done using the school's excellent facilities. One of the benefits is to be able to cast sculptures in bronze. These castings are of facial features including the eye, ear and mouth. I did the originals out of clay while on a workshop in 2001 in Tuscany, Italy. I did small pieces so that I could carry them back with me. I pulled rubber molds from the fired clay images which then allowed me to execute the bronzes in the lost was process. They are mounted on brushed Plexiglas. 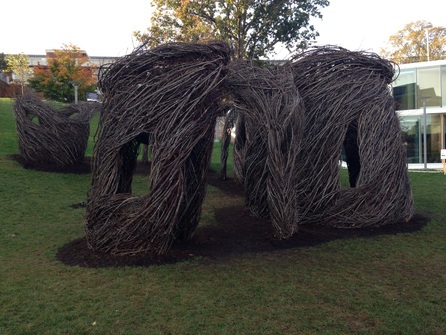 In October, I was fortunate to have been involved with the construction of a major sculpture installation on grounds at the University of Virginia. World famous sculptor Patrick Dougherty was an artist in residence for a four week period. Dougherty is famous for his Stickwork installations all over the world. In fact he has created over 250 of these installation, each one unique and each one designed to blend with a specific site. The installation at the University is located on the Casteen Arts Grounds in front of the new Caplin Theatre. It was built using volunteers from the university and the community. It was a privilege to be a part of this incredible project. 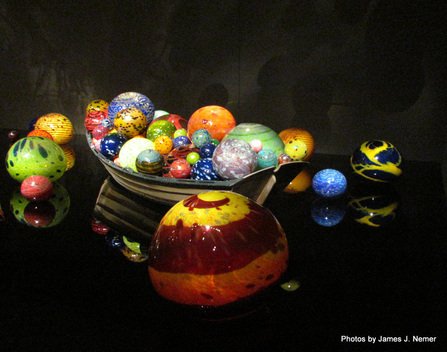 On January 30, 2013, I made a trip to Richmond, VA to see the Dale Chihuly exhibit at the Virginia Museum of Fine Art. What a show! I have always been fascinated with glass and it's vast color ranges and it's ability to be transformed into beautiful shapes. Chihuly is the premier master of glass blowing and design. Click on the "Reflections of Chihuly" button and see for yourself what I am talking about. Enjoy the slide show of my photographs.

THE ART OF THE LIVING CREATURE 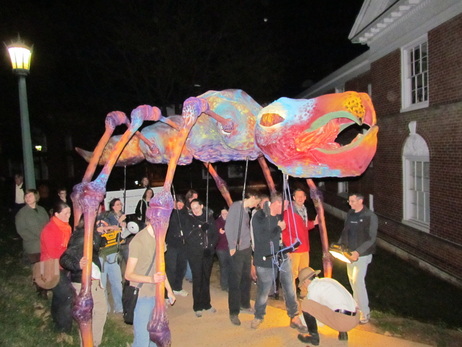 In my never ending attempt to stay active and to maintain a connection with UVA, I enrolled in a class dubbed "The Art of the Moving Creature". It was an interdisciplinary class with the Studio Art, Architecture and Drama departments participating. The University teamed up with the Stan Winston School of Character Art, an on-line course that is run by Matthew Winston, the son of renowned monster creator Stanley Winston. Matt and his associates from the monster creator world in Los  Angeles have conducted two workshops with the class. The first workshop was centered on creating creatures made out of trash bags, chicken wire and PVC pipe. A total of six creature were constructed over a three day period and were paraded outside the architecture building on the grounds of UVA. During the second three day workshop the entire class was tasked with constructing a single creature (pictured). "Winston" as it is known, was paraded on the Lawn and  around the Rotunda at the University. If only Thomas Jefferson were alive to see what his University is doing today, he would, I'm sure, be proud.
In my first attempt at video recording and making a short movie about the performance, I have posted the completed movie on YouTube. You can check it out at www.youtube.com/watch?v=7YIPrk4Fj-I&feature=plcp.  The culmination of the 2 semester class was a festival on April 20, 2013 on the grounds of the University. This was a festival of creatures, including "Winston" that we created during during the Fall term and four more creatures we will create in the Spring term. 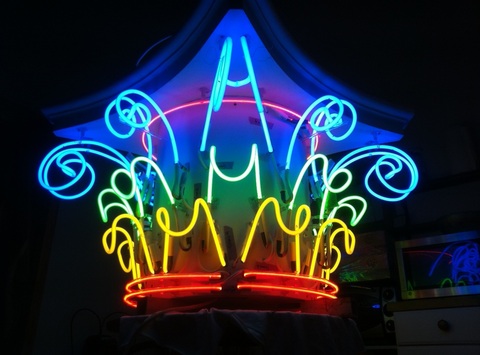 "An Icon Transformed" is currently installed in front of Ruffin Hall at the University of Virginia. It's installation in June of 2012 culminates a two year process from concept to design and  finally fabrication . "Transformed" would not have been possible if it were not for the skill and generosity of my neon fabricator, Ken Droege. More about Ken later.
My interpretation of the classical Corinthian capital was inspired  by my interest in classical architecture and specifically the Corinthian order of capitals. As a student at UVA and a resident of Jefferson country in Central Virginia, I have been exposed to the various ways that Thomas Jefferson incorporated the capitals in his architectural designs. From the Rotunda at UVA to Monticello, Jefferson was prolific in the use of capitals and columns.
My love of color and light were instrumental in my fascination with neon. I wanted to be able to use this material in a sculpture and what better way than to reinvent or transform the classic Corinthian capital. Jefferson, I'm sure, would be proud.
A few words about Ken Droege. I met Ken as a result of a phone call to his home wanting to talk to his wife Farae. Ken informed me that Ferae had passed away recently but asked if there was something he could help me with. Ferae had been a neon artist, thus the reason for my call. I explained to Ken what my project was about and he suggested that we talk. I met with him and he said that he knew how to bend glass and would do the neon fabrication with one stipulation. He asked if I would dedicate the sculpture in memory of his wife. I readily agreed and a friendship was born that continues to this day. I will be forever grateful to Ken for the many hours and materials that he so generously contributed to this project. 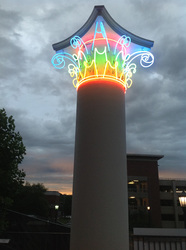 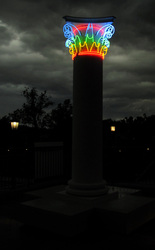 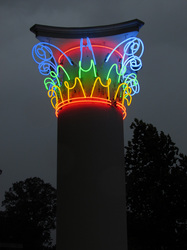 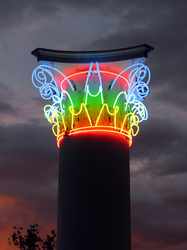 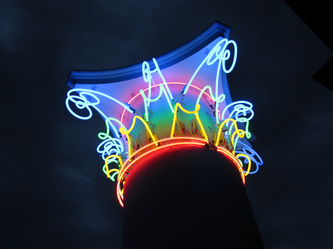 These are some night shots that I took on Friday, June 1, 2012. There was an awesome storm which provided a dramatic backdrop for "An Icon Transformed". 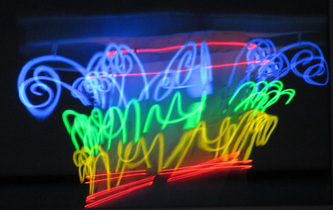 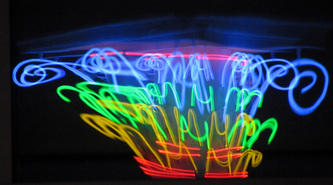 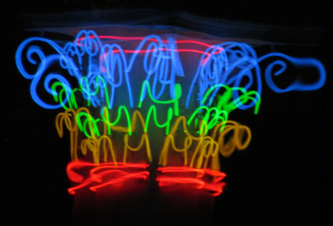 Fun photos that I took with the capital reflected in a window of the Marching Band Rehearsal Bldg. across the street from Ruffin Hall where my column is installed. 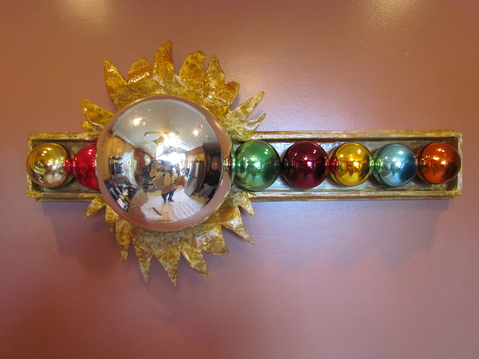 BREAKING OUT
This is a recently completed sculpture that is entitled "Breaking Out". I installed it on April 14, 2012 in a friends house in Alexandria, VA. He commissioned me to take a basket of colored glass balls that he had for years and make a sculpture out of them. This is the result. The frame and sunburst are made out of paper mache.