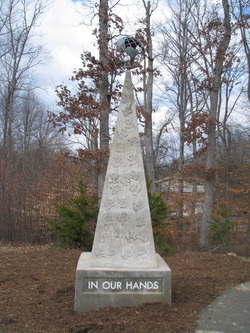 IN OUR HANDS
In September of 2007 I enrolled at the University of Virginia under their Community Scholar program to take sculpture classes. Before classes started Professor William Bennett, the scupture instructor alerted all students in the advanced class that we would have to write a proposal for a requests for proposals issued by Albemarle County for sculptures to be installed at Echoes of Nature Park adjacent to Baker Butler Elementary School. Like any new student, I wanted to do what the professor assigned and to do it to the best of my ability. So I wrote a proposal, made a model and submitted it to the county. I stated to Professor Bennett that "my worst fear was that I might be selected."

My worst fear was realized when I received word that my proposal had been accepted and that I would receive a $2,000 stipend, $1000 for supplies and $1,000 for my pocket. In my eagerness to be a  good student, I then had to perform. I had no idea where to begin. I knew nothing about concrete which was one of the materials I chose to use for the basic obelisk. I had proposed to have embedded in the concrete the hand prints of children from the elementary school. I had no idea how I was going to accomplish this task. There was so much I didn't know about how I was going to pull this off that I was tempted to try and back out of the project. But I have never been a quitter, so I resolved that I would complete the project no matter how long it took. After more than a year of work on the project it was dedicated on Dec. 8, 2008 to great fanfare.

This sculpture would not have been possible without the assistance of three friends from Lake Monticello; Bernie Crowne, Mike Collins and Don Layton. In addition, the cooperation of Professor Bennett and the physical labor of his students was invaluable in all aspects of the project. A special salute to Isabel Ramsey, the art teacher at Baker Butler, for her determination to establish Echoes of Nature Park and her support throughout the process. Many companies and individuals were also very generous in their support. To all of these friends and supporters, I will be forever grateful.

The following slideshow is a collection of photographs take by me and several other people that chronicle the entire evolution of  "The Making of In Our hands."   Scroll the thumbnails on the right to see all of the photos.        ENJOY!