So, what is it that keeps drawing me back to Burning Man? Is it the dust? Is it the people? Is it the art? Is it the love? Is it living in a city with 70,000 other people? What is it exactly that makes me want to endure a week of wind, dust, dirty body, dirty clothing and sleeping in a dirty tent? Many of my friends and family simply don't get it and probably never will. I am the last person that anyone would think would be drawn to a raucous, desolate place in the Black Rock Desert a million miles from nowhere.

This year, more than either of the previous three years I have attended Burning Man, I have come to the realization of why I  am compelled to go. Quite simply it is because the dust is in my blood. With each grain of dust that courses through my body there  is attached  very special friendships, discoveries, incidents, creations, sunsets, sunrises, laughter, sadness, spectacles, imagination and above all LOVE.

Yah I know it all sounds corny and trite but that is what Burning Man means to me. The people, ah the people. Wonderful, caring, loving people. From my campmates in the Cafe Village to the people standing in line at the Coffee Cafe at Center Camp, the people are magnificent. I volunteer at the Coffee Cafe and was fortunate to have as my supervisor a woman named Max. She treated me with respect and unbound love. My job as Ringleader was to direct the thirsty masses to available positions for them to get the caffeine fix or cold drink they so desperately needed. I had  a blast. One night I wore a dress and a red wig and received many hugs and kisses and a couple of proposals. The next night I wore a tiger costume and got scratched behind the ears, on my back and on my tummy.  Grrrrreat!

In the Cafe Village, my neighbors were "Home" and Bill. They helped me get set up and provided me with a pair of socks which I had forgotten to bring. The various people that run the village were well organized and kept the site well maintained. My friend Joe Schepps from Charlottesville camped just across the street and was of enormous help to me. He carried much of my s___ back to C'ville in his van which  lightened my load on the plane. Brooke McCormick was the lead cook/chef in the Kockroach Kitchen. We feasted on one hot meal each day that was not only wholesome but full of taste bud delights. Then there is Starling, Rusty, Dr. Space, Honey Bee, Lodo, David,  Glitter, Haley, MayMay,  and many, many more. All I am proud to call my friends.

Many people ask me what my favorite piece of art was. It is hard to identify one single piece because everything is so beautiful. This years theme was DaVinci's Workshop and the inspiration that came with the title was evident across the entire Playa. As in previous years, The Temple stands out as one of the most beautiful structures. Designed by David Best, this year he used scrap lumber to construct the pagoda like edifice. The Burning Man had the potential to be the standout of mechanical ingenuity, however, it never worked as planned but was still an impressive piece of art. There were a number of metal, glass and ceramic sculptures that caught my attention including the Space Whale, the Octopus, the metal insects and many others.

You haven't lived until you experience the Playa at night. Blanketed with a universe of stars, the various sculptures that were primarily light shows, the art cars, the LED lighted bikes and people became a panorama of color. Breathtaking does not come close to describing the beauty of the night on the desert. I have tried to give you a sense of what the night is like in some of the photos but nothing, nothing can take the place of viewing this fantastic light show in person.

So, what is the take away from my experience this year. I finally came to the realization that I am truly a burner. I cherish every moment, every person, every encounter and every experience that I had this year at Burning Man. Will I go back? I have already started my list of things to take (including socks). As I said last year, if my health will permit and the Lord is willing, I will return to the desert in 2017 and be welcomed home.
A few words about the slide presentation. I begin with photos from my two day stay with my dear friend Robert in San Francisco. The next set of photos show my trip to Burning Man in an RV with Mo, Angel, Jenn, Vera and Roxie. We camped overnight at the Donner Campground in the Sierras and then stopped by Pyramid Lake in Nevada for relaxation and a swim. We arrived at the gate entrance to Burning Man at around 6:00 AM on Sunday morning and was greeted with a beautiful sunrise.  I have arranged the photos in the following categories: San Francisco, the RV trip, sculptures,  art  cars, Burning Man, Burning Man sculptures, The Temple, nighttime on the Playa, Cafe Camp, Center Camp, The Man burning, The End - flying back home. Please understand that this is a drop in the bucket of the many sculptures and art cars that were at Burning Man this year - far too many to see them all.
The following are short videos that I think capture the essence of my experiences at Burning Man 1016.

I attended the Burning Man festival for the third time in August and early September, 2015. To get there is half the battle. Planning, logistics and above all having a ticket were just a few of the issues that I had to deal with. Although I missed out on getting a ticket during the general ticket sale period, I am blessed to have my good friend  Andy Hanneth who had guaranteed me a ticket  come through with flying British colors.
I flew to San Francisco where Betsy Foree, my longtime friend and fellow burner from 2012 provided shelter and meals until I joined up with my rideshare companions for the trip to the desert in a rented RV. We arrived 24 hours after we left the Bay area, a long but enjoyable ride with my new friends.
I camped in the Cafe Village which restricts entry to only volunteers at the Coffee Cafe in Center Camp. This was the second time I volunteered at the Cafe and worked as the cream and sugar guy. My campmates were all wonderful to me and when I fell and broke a small corner of the radial bone near the wrist on my right arm after the Man burned, I had no problem finding sympathy and help. The art was wonderful, the people were beyond great and the experience, like my previous two burns was memorable. Will I return to Black Rock desert and Burning Man, you bet! As long as my health holds up I will go back and enjoy the friendships and the thrill of being a "burner".

I have put together this video so that  you can get a feel for the reason I, along with 56,000 other people, attend Burning Man each year. The excitement surrounding the burning of the Man on Saturday night is palpable. This is what we have been waiting for since arriving  at Black Rock Desert . I was fortunate to have met Andy who managed to get us on a yacht, yes I said yacht, to have one of the best views of the burn and all of the activities surrounding the Man. If the music is too much, just turn down the sound. I chose techno music because that is the dominate sound around the Playa. I hope you enjoy the video. 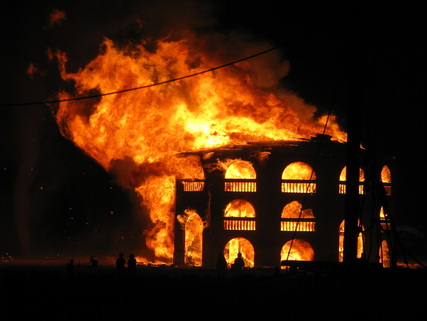 Well, I did it again! After a very positive experience at Burning Man 2011, I decided to venture out to the Black Rock Desert one more time. This time I went with Betsy Foree, a friend from San Francisco. I spent some quality time with Betsy and her husband Ralph for a week prior to our trip to the desert. In a rental SUV, we drove to Burning Man and arrived early so  we visited Pyramid Lake and got acquainted with Native Indians from the area and waited in a very long line of cars, trucks, campers, etc. on the highway leading into the Burning Man enclave. After many hours of inching along we finally arrived and found where our campsite was located. Because we had volunteered to work in the Center Camp Cafe, we were able to camp with fellow workers in a camp very near Center Camp. After setting up our tent, we got right down to the business meeting new people and exploring the many sites and sounds of Burning Man.
One of the highlights of the week was my meeting fellow camp mates from Great Britain. The young couple, Andy and Dominique were to be remarried  during their stay at Burning Man (they had been married in a church service prior to coming to the desert. After learning that they had their entire wedding party arranged except for a flower girl, I asked if they would consider me for the job. They readily agreed. They thought it would be cool to have a 74 year old man as their flower girl. I actually had the guts to include photos of me in all my finery in the slide show on this page. You will also see photos of the many sculptures at Burning Man and the Burning of The Man. Enjoy the trip that you are about to take to Burning Man 2012. 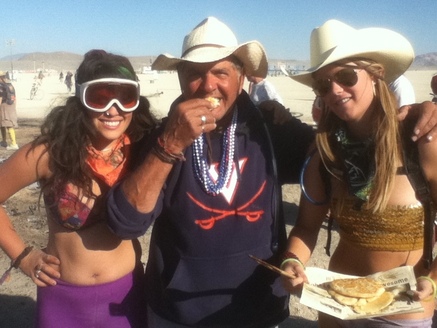 Sunday breakfast of pancakes prepared over embers from The Man by two lovely chefs.
In August of 2011, I experienced one of the most exciting adventures of my lifetime. I, along with two friends from the University of Virginia sculpture community, Joe Schepps and Ed Miller, went to Burning Man at Black Rock Desert in Nevada . What follows is a commentary about this experience and photos and videos, some taken by me, some by Joe and some by Ed. I will expand on this commentary in days and months to come. I will be going to Burning Man again this year.

This is a slideshow. Click on the play button and go through entire collection or pick and choose from the thumbnails on the right.